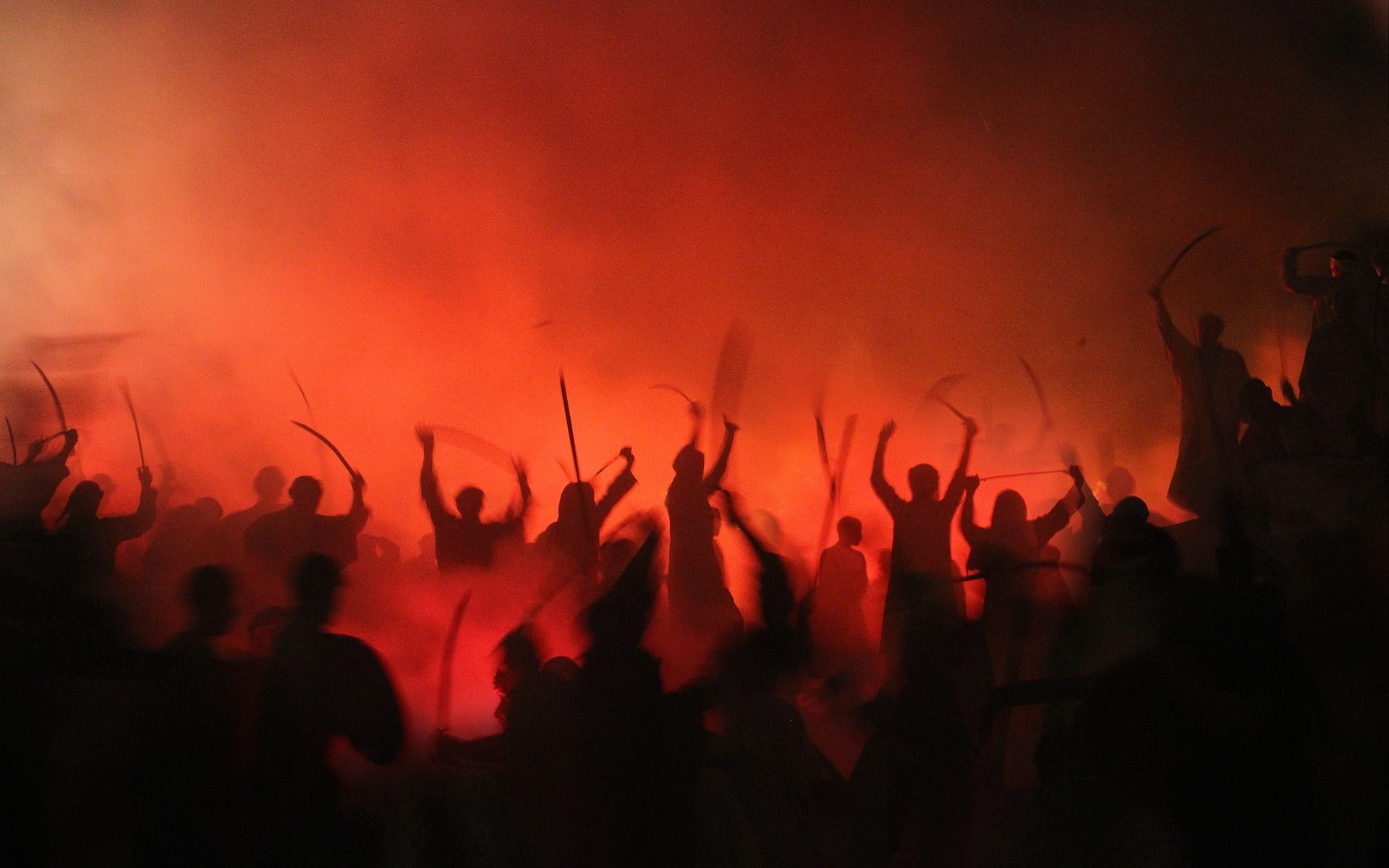 Lieutenant Connie Allaire had drawn her gun. The little switch on the side of the barrel was set to “strong stun”. But she feared that she would have to correct that again. The door in front of her was locked and barricaded with a half-raised cupboard. From outside you could hear someone banging on the door. In the beginning the beating was soft. Presumably the attackers had used their bare fists. But the beats got louder. The attackers had probably got their hands on some kind of object that they were now trying to use as a battering ram.

The room she tried to defend against the intruders was the great plenary hall of the Lokubami seat of government. Her captain had told her to get to safety, but the building was safe only for the praetor. He was able to withdraw into a protective bunker. The members of the government, the Senate and the Chamber of the People’s Representatives should actually be guarded by the protection forces, which should prevent intruders from entering the building. Allaire grimaced. There were clearly too many “shoulds” for her taste. How did this marauding band of demi-monkeys get so far into the building? Where was the security, the hell?

She looked around the room. The barricaded door was the main entrance. There were other doors, but they were also locked. You had to assume that the intruders were everywhere in the building. And if they would use the emergency exit, they would land in front of the building, in the middle of the mob. A woman, a Lokubami, came running.
“We have to get the documents to a safe place!” She said.
“What?” Asked Allaire, horrified. “Now is not the time to worry about any paper!”
“It’s not about any paper!” Protested the woman. “The documents are signed and if we want to depose Scurra according to the rules, they have to remain intact. Otherwise we have to get everything new. That takes a long time! And that is how long Scurra would stay in office!”
Allaire stared at her. That was exactly what the intruders wanted! The process of getting Scurra out of office shouldn’t just be disrupted, it should be stopped!
“But,” she asked, “where can we take these documents?”
“Via the second door we come into a corridor, and from there into the cellar. There is a safe there. We could take them there.”
“What if the insurgents try to break into the vault?”
“You will need days. But I hope that we will get support until then.”
Allaire sighed. She wasn’t sure about that. The words her captain had given her didn’t sound very positive. The coup was considered an “internal matter” unless someone from the Lokubami community made a request for help to ASTROCOHORS. And Praetor Scurra certainly wouldn’t.

“I have no idea how much longer we’ll have to hold out here,” Allaire admitted. “Can you arrange for the documents to go into the safe?”
“A colleague and I will do it,” said the woman. Allaire noticed that she hadn’t asked the woman for her name. There wasn’t time for politeness.
There was a crunch. The door! It started to splinter.
“Okay, do that!” Said Allaire. “We’re doing our best here.”
The woman went to another woman. Both of them gathered up the papers from a central lectern and put them in a metal case. Then the two of them took the metal case and disappeared through one of the side entrances.
At that moment a security man came running.
“It’s about time!” Allaird scolded. “Where have you been all this time!”
“I got the senators to safety. They’re in a separate room back there.”
“Without an exit, of course.”
“Of course. Such a situation hadn’t existed for a long time.”
“I think that’s an understatement. I’ll bet there has never been an armed uprising that the praetor personally instigated.”
Another crunch could be heard. The door moved but still held.
“So what do we do now?” Asked Allaire.
“If the door gives way, we’ll shoot anything that moves into the room and pull back to the senators. Then we’ll lock this room and … hope.”
“Hope? Do you still believe in Santa Claus?”
“Santa Claus?” The security guard looked confused. “I’m sorry, but I’m not that familiar with Terran culture.”
“It doesn’t matter that much,” Allaire growled. “I just wanted to say that we don’t have much to hope for. Your stupid praetor caused all of this. And he’s the only one who can help us. So what hope do we have?”
“His deputy could turn against him and ask for help. Or the house spokeswoman in an extreme emergency.”
“The deputy is a spineless worm who only cares about his own career. If he turns against Scurra, his career is over. And the house spokeswoman won’t get a chance, because sooner than she can call for help, Scurra will revoke the order . So again, what hope do we have? “
The door creaked again.
“Look here!” Said the security man. “I was a great fan of Scurra.”
“What? Sorry, but don’t you have a brain?”
“But it’s not me anymore! I … had to realize that he’s not the great man I thought he was.”
Allaire looked at the barricaded door. “A little late to have a conscience now, isn’t it? Where were your scruples when Scurra fueled this mob out there and made the situation we are in possible?”
“I … I don’t know … I’m not a bad person.”
“You still have to prove that to me! And I’ll tell you one thing: If we’re in there with the senators and this room is stormed too, I’ll throw you to this mob to eat!”
“It’s only fair,” muttered the security guard.
Both brought their weapons to the ready. At that moment the door broke open. The two shot. People fell. Allaire and the security guard slowly withdrew. The mob seemed unsure what to do next. That gave both of them a small advantage and they were able to retreat to the room where the senators had taken refuge.

Once in the room they pushed a larger cupboard in front of the door. Allaire shook her head. What a situation. The room was big enough to hold all the people who were there. They were understandably scared.
“I think,” said the security guard, “I got four of them. And you?”
Connie wiped the sweat from her forehead. She was about to answer when her eyes fell on the security guard’s gun.
“Your gun is set to ‘kill’!” She shouted.
“Of course!” Replied the security guard. “It’s nice to stun people, but we won’t get any further. We need some deterrence.”
“Some deterrence?”
“Madame,” he said, “listen up. My colleagues out there failed. I saw it on the monitor. A couple of them just let this gang in. They pulled back. And now the mob thinks … can you hear that? “
She heard it. The people who had broken into the chamber were shouting slogans. “Emperor Scurra! The Eternal Emperor! Scurra, Redeemer!”
“Fanatics. Now what? They’ll come here. And you’ve given them four more reasons to be really angry! Great! Besides, we have no idea whether your colleagues have failed, or if someone in the leadership has failed. The situation has definitely not gotten any easier! “
A low beep could be heard. That was Allaire’s communicator. She pulled the device from her belt and turned it on.
“Allaire here, BOURGOGNE, is that you? Please tell me something nice!”
“Here’s the captain,” came the radio. “I can even say something very nice: We’re coming! Hold on a little longer. Lieutenant Commander Villers and his team are on their way.”
“That is good news indeed,” replied Allaire. “I am in a separate room with the senators and a trigger-happy security guard behind the plenary chamber. The intruders have entered the chamber. There are at least four injured among the intruders, as far as we can estimate. And if you don’t hurry, we will there are a few more. “
“Villers will pacify the area. He will contact you as soon as he is in the building. BOURGOGNE over and out!”